A ceremony was held on June 21, 2018 to open a superior court on the Wagmatcook Reserve. The court is located inside the Wagmatcook Cultural and Heritage Centre in Wagmatcook, Nova Scotia. This court is believed to be the first of its type in Canada.

The establishment of the court follows a recommendation from the 1989 “Royal Commission of Inquiry on the Donald Marshall Junior Prosecution” to have more provincial court sittings on Nova Scotia reserves. This recommendation was echoed most recently by the 2015 “Truth and Reconciliation Commission of Canada.”

The Donald Marshall Junior Centre for Justice and Reconciliation will house a provincial court and the family division of the Nova Scotia Supreme Court which will incorporate indigenous restorative justice traditions and customs including a Healing and Wellness Court and Gladue court.

Ron Dalton and Win Wahrer represented Innocence Canada and its clients at the unveiling which was even more significant because it took place on the Indigenous People’s Day.

Ron and Win were humbled and honoured to be at this historical occasion in memory of their friend and the first Canadian recognized as wrongly convicted. Junior inspired and gave hope to other wrongly convicted people to continue the fight to clear their names.

The ceremony and the unveiling were extremely moving and respectful to Donald Marshall Junior’s memory. Tributes were paid to him, his family and the Mi'kmaq people.

Fifty of Donald Marshall Junior’s family, Mi’kmaq Chiefs, friends, supporters and performers were in attendance along with dignitaries from all levels of the Nova Scotia government, judiciary and Mi'kmaq community.

Wagmatcook First Nation Chief Norman Bernard said “this is truly a historic day for the Mi’kmaq and the province of Nova Scotia. It’s an example of reconciliation with Indigenous people through the courts and will reflect Mi’kmaq values.

Marlys Edwardh, one of Donald Marshall Junior’s lawyers and former Innocence Canada Board member, returned the repatriation feather to Nova Scotia. The feather had been given to her on her 60th birthday by Junior’s long-time friend Jane McMillan who Junior had given it to. Junior had been given the feather by fellow exoneree, Wilson Nepoose. The feather, a sacred symbol of First Nations culture was given back to the Mi’kmaq people. The feather will remain in the courthouse as a reminder of the injustice that was done to Junior, his family and the Mi’kmaq in the hopes that such an injustice will never happen again.

It was clear that no one who observed or took part in the ceremony has forgotten the gross injustice that lead to forgiveness and collaboration between the Mi’kmaq people and the province.

The presiding judge of the new court is Justice Laurie Halfpenny-MacQuarrie who worked closely with the local Aboriginal Chiefs to bring the idea of the court into reality. The court will sit every Wednesday. 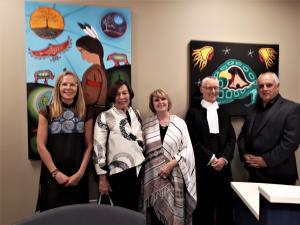